The dagaz rune is the rune given to Magnus on his room key at the Hotel Valhalla. It symbolizes new beginnings. I think this is a fitting way to start this post since this is the follow up to “My Reading Journey” post.

In August of 2007, I started a new beginning. This August I will also start a new beginning, as I add graduate instructor to my titles. 10 years after I first started classes at UPenn, I’ll return to teach a secondary ELA methods class at GSE. I’ve been back on campus since graduation, but when I returned for the instructor institute in late June, it was like returning home. It truly is a new beginning for me. From being told I wouldn’t get be accepted into the doctoral program to now being a teacher at America’s oldest university, it has been a road I only dreamed of.

This September also marks a new beginning in my classroom. I will start my 25th year teaching middle school ELA. Being in the middle school classroom is nothing new for me, but each year is. I have a new group of students in front of me. Even if I taught the students the year before, they have grown and changed and are different people than they were in seventh grade. I’ve also changed and grown. I’ve learned new things about reading, writing, pedagogy, and myself. This year will be no different.

As mentioned in the previous post, I have been studying Disruptive Thinking, and the Book, Head, Heart (BHH) framework. After trying it out with “The Journey,” I decided to try it with a longer book. Since I was reading Magnus Chase and the Gods of Asgard: The Sword of Summer, I thought I’d try it.

The chapters I read (and practiced on) are about Magnus getting his room in the Hotel Valhalla, meeting his Valkyrie, Sam, and going to his first dinner where his feats will be heralded. That’s the Book part of the BHH framework. 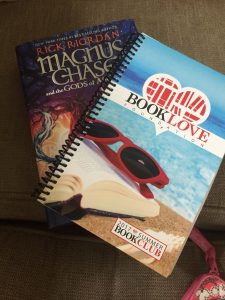 I had my Book Love journal next to me, figuring I’d use it to jot down things I noticed. I wanted to experience what my students might experience. The first thing I noticed was the setting. Riordan, whom I probably don’t give enough credit to, is incredibly descriptive.

Each hall we walked through seemed bigger than the one before. Most of the hotel guests looked like they were in high school, though some looked slightly older. Guys and girls sat together in small groups, lounging in front of the fireplaces, chatting in many different languages, eating snacks or playing board games like chess and Scrabble and something that involved real daggers and a blowtorch. Peeking into side lounges, I spotted pool tables, pinball machines, and old-fashioned video arcade, and something that looked like an iron maiden from a torture chamber.

Staff members in dark green shirts moved among the guests, bringing platters of food and pitchers of drink. As far as I could tell, all the servers were buff female warriors with shields on their backs and swords or axes on their belts, which is not something you see a lot in the service industry (Riordan 59).

I could continue on with Magnus’ first impression of the hotel, but you can read the book. I wanted a long enough passage to illustrate two points. First, I was able to visualize the hotel. Now, I did use my prior knowledge of having been in a hotel to have a vague idea of what it looked like. However, what about kids who haven’t had an opportunity to travel? That’s where the beauty comes in. Riordan doesn’t assume the reader has been in a hotel. He doesn’t assume the reader can see in his head. He creates a world for the reader. We know how guests are grouped, what they sound like, what they are doing. We know the specific names of the games. We know what the staff looks like. If you were to continue reading, you’d even know what specific food was being served.

All of this information is important because it places Magnus in this fantastical world. Riordan doesn’t speak down to the readers by assuming that every single one of his readers will have background knowledge about fancy hotels. Instead he creates a world. When we talk about Head, I think about what surprised me and what did the author already think I knew.

In this case, I thought about how the author didn’t expect me to know setting and really spelled it out for me. I was concerned the author expected me to know about Norse mythology. However, he didn’t. Not really. Since Magnus has a guide, Hundig, any questions the reader might have are the same questions that Magnus might have. Magnus asks the questions, and and Hundig answers them. In this way, I wasn’t worried that was going to have to look up Norse mythology or rune meanings. Instead Hundig and then Sam did that for me.

Continuing along with Head I noticed that Magnus was Riordan’s first male protagonist who really loved to read. Magnus tells the reader, “Yes, I like to read. I’m weird that way. Even after dropping out of school, I spent a lot of time in the Boston Public Library, learning random stuff just to pass the time in a warm, safe place. For two years I had missed my old book collection; I never seriously thought I would have had one again” (Riordan 66). Magnus is definitely going to be a different character than Percy. Looking at the sentence in more depth, it could be a great teaching point for characterization. It could also be a great mechanical teaching point. Riordan uses a semi-colon to join the two sentences together. This is a great way to help kids understand that using a comma to join two independent clauses together is incorrect, and a semicolon is a great option if they don’t want to use a coordinating conjunction. It’s a great way to see the rule “in the wild.” I’ve also noticed that Riordan uses really strong verbs. This could be another teaching point.

As I move to Heart, I’m struck by a few different things. First, Magnus is called a hero by Sam, his Valkyrie. He responds, “I’m no hero!” Sam has a very strong response to him, “Don’t say that,’ the girl hissed. ‘DO-NOT-SAY-THAT! Especially not tonight at dinner’” (Riordan 73).

Magnus has a lot of trouble acknowledging and accepting the things he’s good at. It’s not false modesty. He really doesn’t see who he is. The reader already has a sense of Magnus and understands why Sam has saved him. At this point, I felt a connection with Magnus. I don’t know why he doesn’t see himself through a truthful lens. I know why I didn’t see myself through a truthful lens for a long time. However, Magnus seems to have had a mom who really loved him, and if anything, over-inflated who he was.

Later, Sam says, “’More heroes dying means more bad things are stirring in the world. Which means…’ She pursed her lips. ‘Never mind. Let’s get seated’” (Riordan 84). I read this line and stopped. In a reading conference I might ask the student what they think it means, and we’d talk through their inferences. In fact, I suspect my good readers wouldn’t even realize the inference, their brain would already fill in the gap, which would be another great conference topic. However, in this case, I thought about the trouble that’s brewing in the world Magnus left behind. I thought about the conflict and upheaval in our world. I’m struck by wondering what other parallels there will be as I continue to read. Is this book going to mirror our world back to me?

Furthermore, the reader learns that Gunilla, the head Valkyrie, has unveiled Valkyrie Vision for accountability. Apparently, there’s been a problem with people being brought to Valhalla who may not really be heroes. There’s the concern that the Valkyrie’s aren’t really doing their job. It made me think about police using body cameras supposedly to give everyone greater safety and a better level of accountability. However, Riordan brings up a point, I hadn’t thought about. What if that video is tampered with? This what the reader sees when Sam’s video is played. The video of the fight on the bridge was cleared edited. We know that because we were on the bridge with Magnus. Magnus refers to the video as his blooper reel, and it makes Magnus and Sam seem like they are less than. Valkyrie Vision makes it appear that Magnus really isn’t a hero.

What happens when body camera footage is tampered with in our world? How does that impact justice and safety?

Furthermore, is this part of the reason Magnus doesn’t feel like a hero? His life is constantly being seen through fun house mirrors and the distorted reflection impacts his self-esteem as well as how others see him.

The final note I wrote in my journal is “Lit as a mirror—reflecting, trickery, conflict, inequality back to the reader.”

As I continue to read, I wonder how this book will impact my students’ view of the world if I use a BHH framework with them during reading workshop. Will Magnus Chase help them realize that everything being reflected back at them is not the truth—even the things people say to them about them? If that’s the case, what am I doing as a teacher to help them determine what is truth and what simply a distorted reflection?

As I plan for my new beginning in middle school, I need to think about those lessons.