A Novel Forged by Voice and Determination

My Bias
It is only fair to you, Dear Reader, that you know that I have known Erica George for a long, long time. I first met her in 1999 when she was an eighth grader walking into my English language arts class for the first time. Even then, she was a writer. The year I had Erica our curriculum had changed, and students no longer had a period for reading and a period for language arts (which was a writing class). Instead we were trying to cram everything into one 42-minute class. And I felt like I wasn’t doing her or any of my other writers justice because we lost the time to work in our notebooks. We lost time to explore. And we lost writing choice. Gone was the time when we could take a deep breath and emerge ourselves in words. However, as I followed Erica’s journey from student to ELA teacher to author, I learned that my students will most likely succeed in spite of me and not because of me.

Today’s blog post is probably the most meaningful writing I’ve done because I finally–after years of reading Erica’s work in progress–get to blog about her debut novel, Words Composed of Sea and Sky (Running Press May 25, 2021).

So yes, Dear Reader, I have a strong favorable bias towards this author, whom I consider a dear friend, and her work. That being said, this is one of the best books I’ve read in 2021. And I urge you to get a copy when it’s published (or pre-order it now). 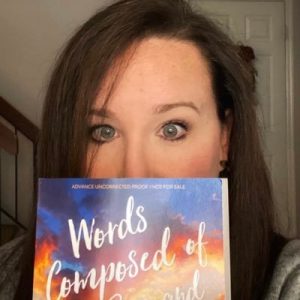 The Novel
Words Composed of Sea and Sky is the story of Michaela Dunn, a 17-year old, living in present day Cape Cod and of Leta Townsend, a young woman, living in 1860s Cape Cod. Both protagonists are writers. They are poets. Leta desperately wants her poetry to be published, and Mack wants to attend a writing program at fictional Winslow College. Both make choices for their craft. They are protagonists that jump off the page and feel like real people. But Erica has a knack for character, so this does not surprise me.

In the pages of the novel are the poems that both Mack and Leta compose. That is expected. What is so unexpected is how poetic the prose in this novel is. The imagery that is evident in this novel takes the form of three clear categories: 1) the ocean, 2) people, and 3) natural events.

The Ocean
Novel is set in the fictional town of Highland on Cape Cod. Thus, the ocean, bay, and beach are all expected to be part of the setting. However, in George’s hands, the ocean becomes another character. Its moods and the descriptions of the ocean set the tone for many of the scenes in the novel. And they are quite simply beautiful to read.

The beginning pages of the novel not only set the scene, but they put the ocean front and center. Michaela muses, “The best part of being here is knowing that the rest of the world is before you. That the sea can whisk you along wherever it decides to go. There’s something grounding in that. Something that keeps me still. Something that makes me stay here, at the tip of the world, the start of everything. The start of whatever I want” (George 17). From these early lines, the reader understands how the ocean, Cape Cod, and Michaela are intertwined. It is easy to see the start of something big happening here–not just because of the vastness of the ocean–but also because Mack is on the verge of deciding a path for her future. The ocean becomes a metaphor for that.

A bit later in the novel, a chapter begins with this description: “A storm gathers over the ocean, whipping the waves into a frenzy, their frothy whitecaps trampling the shoreline” (George 74). It’s easy to imagine the dark clouds menacing over the water, the wind, the waves, the darkness of both sky and water. This might be the quintessential “show don’t tell” sentence ELA teachers go on and on and on about, and students fail to capture and then start to tell themselves that they can’t write. The scene is set. It’s storming. But the description of the storm, the word choice, also helps the reader feel the tension that is building–slowly between not only Mack and her writing, but also between Mack and Caleb.

The People
As in any novel, the way the author describes the characters makes the readers love–or hate–them. What the reader sees in Words Composed of Sea and Sky are disconnects between the way that George paints a character and the way that Mack or Leta sees the character. Going back and paying attention to these subtle differences can help you decide if you’re Team Finn or Team Caleb. Team Elijah or Team Ben.

When we first meet Finn, “He’s a shadow, darkened in contrast by the sun’s blinding corona behind him” (George 20). And “He plods toward me, the gentle splish-splash of the tide pool relaxing my whole body as the water parts with each of his steps” (George 21). While Mack initially balks when she realizes who she is talking to is Finn Pearce–the sun behind him blots out his features–the reader has a different image of Finn. Both sight and sound make Finn seem like someone to trust. Someone who is gentle. And someone who just might be a prince–even without the corona surrounding his head.

These words are the narrator’s description of Finn, and in sharp contrast to what Michaela thinks a few pages later: “Finnian Pearces is a one-way ticket to mediocrity, which is just the kind of guy Russ would feel comfortable around” (George 58). There’s nothing worse in Mack’s mind than being banal and common. Except, of course, being Russ–her stepfather. Her thoughts about Finn are cruel and cutting and are in sharp contrast to Finn’s earlier description. This definitely puts the reader a bit off balance. Especially when Mack’s thoughts of Caleb are so different, “Narrowly escaping being plowed down by the cute boy in his navy-blue Audi convertible on my way to pick up my little sister from school was decidedly not on my list of ways to meet the perfect boy” (George 10). Through Michaela’s initial description of Caleb being the cute boy or the perfect boy, the reader is initially predisposed to like Caleb. And yet, look more closely. Mack uses very common expressions for someone as fabulous as Caleb and the narrator uses beautiful poetic language to first describe Finn.

Natural Events
Despite the language for the people and the ocean being beautiful, I think the most poetic language comes in the form of the description of ordinary natural occurrences. “A full moon waits on its haunches just above the canopy of trees” (George 19). The language used to describe the moon rise is both solid imagery and reminiscent of Sandberg and his poem “Fog.” In this case it’s not the fog moving in on “little cat feet” sitting on “silent haunches” but the moon. There’s something calming and comforting about this imagery in this description. Another serene, pastoral image is “The hush of the sea is accented by the chirping toads, the strings of crickets” (George 94). In that one line, the reader is immediately in the garden in the evening. The air is still. The sounds muted. Nature creating its own symphony for Leta and Ben.

Despite the language being so incredibly beautiful in this novel, it is easy to move beyond the language and get caught in the dual storylines, pulled along by the tide and conflict in the novel. It is a book that dares you, Dear Reader, to stop reading before it comes to a satisfying and hopeful conclusion. And despite the fact that I read this in practically one sitting, it is a book that begs to be reread in order to fully appreciate the multi-layered nuanced storytelling. And I am looking forward to taking my print copy with me to the beach this summer for a reread. I’ll bring a little bit of Cape Cod to the Jersey Shore.