After reading The Voting Booth by Brandy Colbert, I decided to check out her back list. I chose Pointe and Little & Lion to add to my classroom library. Pointe initially intrigued me because the protagonist dances. I can’t think of one single book in my classroom library that features dance as part of the book and yet I have a lot of students involved in dance. The tagline on the cover also grabbed my attention: “First he stole her heart. Then he took her friend. Now she knows the truth.” 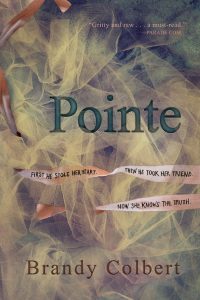 After reading the book, I’m confronted by all the layers this book has. Yes, ballet is part of the book. However, it’s not really a book about dance. Ballet is as much a part of Theo’s identity and characterization is her age or being an African American. On one level, I was a little disappointed that the focus of the book wasn’t about ballet, but then I actually stopped and went deeper into the layers of the book. And that’s where my disappointment ended.

While the cover makes it seem like the book is about romance gone wrong, it’s much more serious than that. The book is about sexual abuse. In the way that Speak was so important when it first came out–and 20 years later is still just as important–because it gave victims of sexual assault a voice, Pointe gives victims of sexual abuse a voice. This is not a topic that is widely covered in YA books. Again, thinking about my classroom library, I can’t think of a book off the top of my head that deals with this issue.

Pointe slowly and sometimes painfully reveals what happened to Theo the spring she was 13. She and her friend Donovan meet “an older kid” at the local convenience store. Chris tells them he’s 18. He’s really 26. He grooms both of them to be his victims. He tells Theo she can’t tell anyone about their relationship because they won’t understand why an 18 year old is interested in a 13 year old. They won’t understand their love. Reading the scenes between Chris and Theo is cringeworthy at best. It’s heartbreaking. And I kept wondering how she could fall for all his lies and manipulation–but she was only 13. Of course she fell for it.

And  Donovan fell for it too. And for Donovan it was worse because Chris abducted him. Because this is first person narration, we only know what Theo experienced and how Donovan reacted to her relationship with Chris. We don’t know what really happened between Donovan and Chris. However, the reader does experience the aftermath first hand–what Donovan’s disappearance did to Theo and to Donovan’s family and the ways the abduction has changed Donovan.

She also struggles to have normal romantic relationships with boys her own age. As Colbert weaves together Theo’s past narrative and the present narrative, it becomes so easy to see all that Theo has lost–not just her innocence and not just her best friend. She’s lost her confidence in herself. She is afraid that if people find out about her relationship with Chris, they won’t want to be friends with her. She’s afraid that if her connection to Donovan’s kidnapper is revealed, she’ll lose her chance at summer intensives and a shot at a career as a dancer. In her attempt to control the narrative, she loses her voice and she relapses with her eating disorder.

When Donovan returns home, he isn’t speaking. The trauma has left him selectively mute. Chris has taken Donovan’s voice from him. Theo also struggles to find her voice and tell others about what happened not just to Donovan but also to her. With Donovan not speaking, it looks like Chris will walk and be able to prey on other kids. Theo knows that she is the only person whose voice can put Chris behind bars. But her need for control has taken her voice. The main conflict is whether Theo has the ability to speak for herself and for those who can’t–mainly Donovan.

In the end, the reader is clearly able to trace a direct line between Theo’s life now at 17 back to what happened to her when she was 13. Her life after Chris is a reaction to the sexual abuse she suffered:

Despite all she loses and all that impacts her because of the abuse, the reader is left with hope for Theo and Donovan. Hope that they find their voice, make peace with the past, and learn to loosen their tight grip on control.